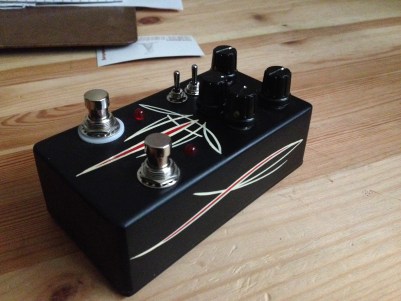 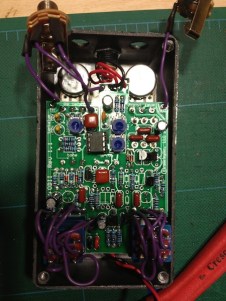 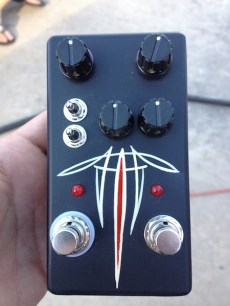 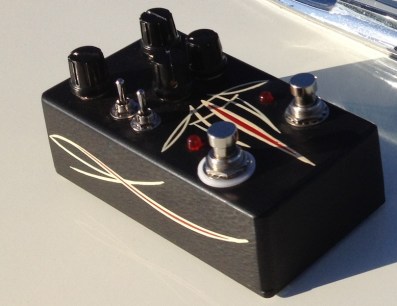 Howdy friends – here’s the latest pedal build. This specimen is a BYOC Overdrive 2, touted by the good people over at buildyourownclone.com as the “Rolls Royce of Tube Screamer Clones”. This little baby has the most popular mods built in including 2 different clipping options, 2 EQ options, socketed opamps  and a separate boost channel. The pedal also has an option to build it to MOSFET specs or standard spec or a little of both. I chose to have the MOSFET input buffer (better overdrive performance, as per general consensus on the BYOC forum), currently using the Burr-Brown OPA2134, the clipping mod is set to silicon diode/lift/MOSFET and using the standard silicon boost. Finally, there is tone mod to add more bass accessible with a switch – essentially a low pass filter – to the signal.

I chose not to do the LED clipping mod on this pedal because when I tested it, the lift position yielded a very similar tone as the LED mod. From what I understand, this is a known phenomenon and I wanted three very distinct sounds to choose from. The silicon diode option has a significant level drop, so you will have to adjust your output knob accordingly.

As I was building it, the most difficult thing to do was to ensure that I was adding the correct components to the right spots on the PCB. While I wanted to build the input buffer to MOSFET specs, some spots on the PCB had to be left blank. I ended up forgetting a couple of resistors, and the pedal didn’t work when I finished the build. I posted my problem on the BYOC forum, and got several speedy responses, including one from an eagle-eyed moderator who pointed out my omitted components. Once I got that resolved, the pedal worked like a charm.

The Overdrive 2 sounds great! I really like the tonal palette that I have available, and since the clean boost works independently of the overdrive side, it makes a great boost/buffer that seems to wake up my beloved (but slightly tone-sucking) Danelectro Dan-Echo.